We managed to get another Hail Ceasar game in Hughes house on thursday which I offered to arrange.  I had always looked at the battle just called 'Onomarchos in Thessaly 353BC in Duncan Head's excellent WRG book 'Armies of the Macedonian and Punic Wars' which pitted Phocians against Macedonians but also introduced artillery into the field for the first time and always thought it would be an interesting one to fight.  There were four players a side with Colin Jack commanding the Phocians with Bart Zynda, Mr Ray and myself while Donald Adamson, Jim Conquer, Dave Patterson and Hugh Wilson took the Macedonian side and the two commanders were given the following briefings.

Phocian brief
Onomarchos you have brought an army into Thessaly, with the intention of attacking Chaereonea.[38] Under the terms of your alliance, Lycophron of Pherae requested aid from you, so you dispatched your brother, Phallyos with 7,000 men;[36] however Philip of Macedonia has repulsed this force before it could join up with the Pheraeans and are now marching on to relieve the siege of Chaereonea where your main Phocian army is based.  Phallyos has fallen back with the remains of his force so no doubt Philip will be expecting you.  Your supposed allies the Pheraeans haven’t turned up yet so you are short of cavalry but you are confident that your mercenaries are more than enough to deal with a bunch of Macedonians especially if you set up in ambush for them along the Chaeronea road.


6 units of skirmishers, two of javelins, three of slings and one of bows
8 units of light infantry


1 unit of Citizen Hoplites
Mercenaries
6 units of Hoplites
3 light artillery pieces, these can be formed as one unit or split up


You can arrange your force anywhere on the road to Chaereonea.
A skirmish unit can be hidden in each of the small farms.
The mercenary hoplites and artillery are hidden until they move or shoot.
Special rules for light artillery, the 1st time a unit is hit it will test on a -1 on its break test.
Victory conditions
Destroy Philips army.


Macedonian briefPhilip you have brought an army into Thessaly, with the intention of attacking Pherae.[38] Under the terms of their alliance, Lycophron of Pherae requested aid from the Phocians, and Onormarchos
dispatched his brother, Phallyos with 7,000 men;[36] however, you repulsed this force before it could join up with the Pheraeans and are now marching on to relieve the siege of Chaereonea where the main Phocian army is based.  Phallyos has fallen back with the remains of his force so no doubt Onomarchos will be expecting you.  Your supposed allies the Thessalians haven’t turned up yet so you are short of cavalry and light infantry but you are confident that your pike phalanxes are more than enough to deal with a bunch of Phocians especially when you saw how easy it was to beat Phallyos.
Your force consists ofPhilip II, commander rated 9
Parmenio, second in command rated 8
Anotheros, staff officers rated 7
1 unit of companions


2 units of Greek cavalry
3 units of skirmishers, two of javelin and one of slings

You will arrange your force in order of march on the road to Chaereonea.
Victory conditions
Raise the siege and destroy Onomarchos’ army.

This was the layout of the forces at the start of the battle. 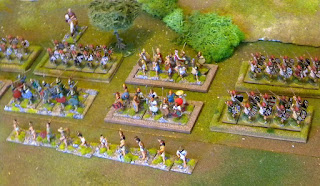 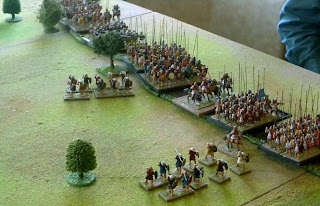 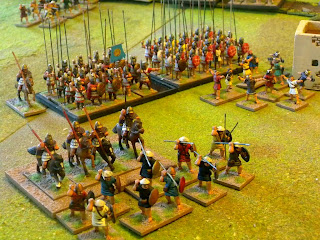 Macedonian guard troops advance to their right flank as they suspected some hidden troops. 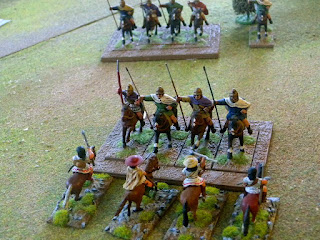 I threw a blunder at one point which drew my skirmshers out of their hidden positions.
My archers were quickly wiped out but my light cavalry which came on the Macedonian rear
managed to pull Phillip and two units of cavalry away from the main battle for 3-4 moves. 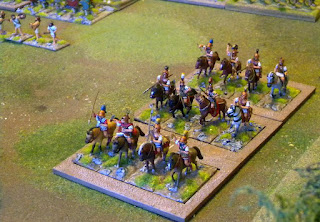 Unfortunately the Phocian cavalry made no advance to take advantage of the fact
that the now outnumbered the Macedonian companions 3-1. 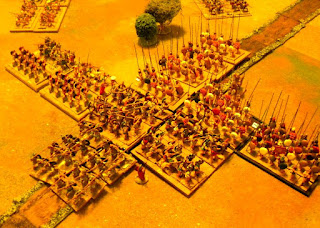 After a series of miss-rolls and blunders Dave's Macedonian phalanx finally got into combat
but we had to finish the night before there was a resolution.

As neither side achieved their victory conditions the game was declared a draw and I also started to have problems with my camera hence the last photo and I never got one of the Phocian artillery.
It was only at the end of the game that I found out that Bart and Ray had new fought
an ancients battle before and Colin hadn't had only fought a few which might have been
the reason there was so little offensive spirit from the Phocians
so I'll need to remember this for the next battle.

I had always assumed that this battle had been a one-off but it was only when I started
to do some research for this battle that I discovered that the battle was part of the
3rd Sacred War which I had never heard off before and was really where the Macedonians
started to form the army that Alexander would eventually lead to glory.
I also after doing more research realised that I had probably over rated their troop qualities
and had only taken their details from the previous games we had fought.
When I started to explain the details of the war all the other guys were fascinated
and we hope to arrange more battles from the war.
Posted by General Buggeration at 19:10