Here are another couple of shots which show off Adrian's Walls to perfection and the figures beside and on them give a good idea of scale. 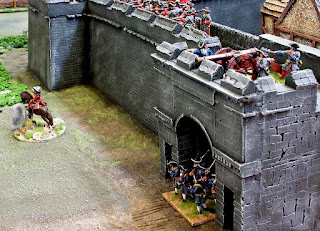 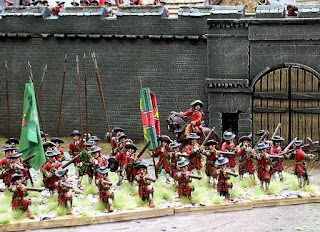 Posted by General Buggeration at 21:43 3 comments:

It's been a few months since I've last posted mainly due to family, friends and work getting in the way of a lot of gaming and me forgetting to take a camera to the few games I did have. Fortunately my mate Barry Hilton took his camera long to take some shots of our demo game we put on at Carronade, the annual show of the Falkirk Wargames Club.

This was also the first outing for the new range of fortifications from our mate Adrian Howe and Adrian's Walls made a stunning background to our skirmish game which was also the first public outing of a new set of late 17th early 18th century skirmish rules called Donnybrook by Clarence Harrison. Other top mate Bob 'Toggy' Talbot also took part in the demo. 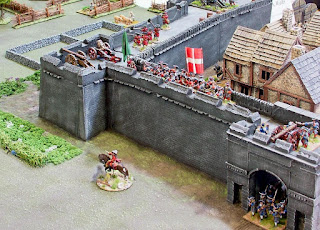 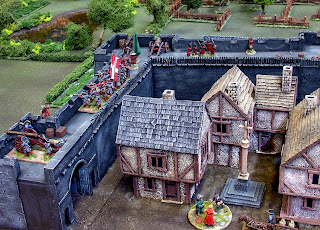 A couple of great views of the front and back of Adrian;s walls. 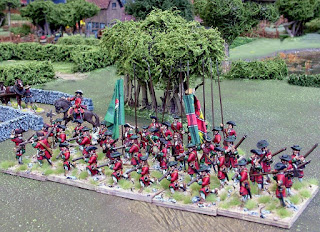 The show was also the first outing for my latest painting project
The Tangiers regiment for fighting against the Moors in the 1680's
The figures are individually based on pennies for skirmish actions but
also fit into these larger bases from Warbases for use in different styles of gaming. 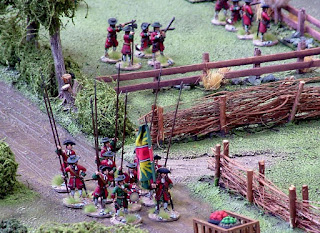 This photo shows them being used in the skirmish mode,
group of pikemen have two characters, a drummer and ensign
attached to them while the small unit of musketeers in the background
are led by a sergeant.
I hope to take more pics of this unit and show the number of units
and characters I can get from it for using in Donnybrook.
Posted by General Buggeration at 23:09 3 comments: