The League of Gentlemen Wargamers had one of their regular get togethers at Kirriemuir at the weekend and I had offered to produce the small scenarios for the Saturday gaming so I made up a variety of 6 differing scenarios but due to shortage of numbers we only managed to fight 5 of them but I will post all of them here incase anyone wishes to try them out. The way I set up the scenarios was that each player would fight each scenario from both sides so that any imbalance of forces would be evened out.  All the figures and terrain was from the collections of Colin Jack, Peter Nicolson, Angus Konstam and myself with a few more guys adding jungle terrain. 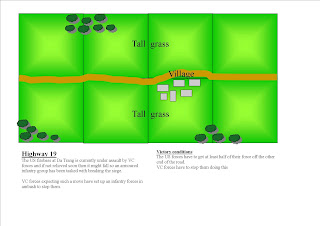 The 8x4 table, the Americans enter from the right hand side 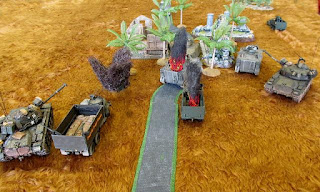 This battle was fought 5 times with different results each time.
In the first battle the Americans never even got past the village and were destroyed by the ambushers but each following player seemed to learn and improved each time but it was only on the fifth game that the Americans finally managed to get off the table.
If you fight any of these actions I would be interested to hear how they go. 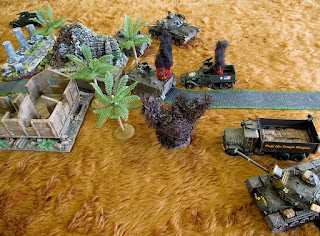 We used a variation of Bolt Action rules written by Bill Gilchrist for these games which everyone seemed to pick up very quickly and really enjoyed.
Posted by General Buggeration at 12:43