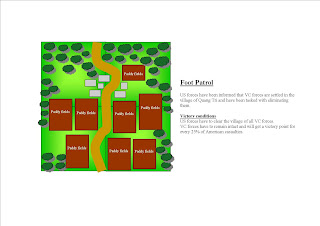 This was the third scenario from the six I organised for the Saturday games.
My original plan had been for Angus Konstam with his Aussies to start off this battle but as he couldn't make it until after lunch I took his place using Americans instead. 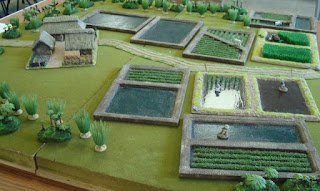 The Americans advanced onto the table from the right hand side and had to clear the village of VC forces.  This was one action where depending what happened both sides could claim a victory if the US forces cleared out the village and the VC caused 25% casualties on the enemy. 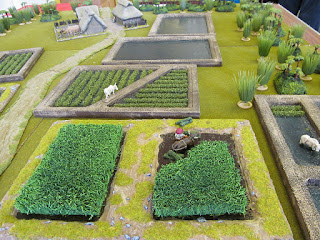 Before we started this game Bill Gilchrist our Bolt Action expert said that with the VC being classed as inexperienced it was going to be a turkey shoot, and that's how it ended up
but unfortunately it was my Americans getting shot to bits with Charles Grant inflicting 50% casualties on my troops. To be fair I was facing an ex-army Brigadier General so he should know what he was doing and it also didn't help that I forgot that my troops were armed with assault rifles and shouldn't have had a minus for moving and shooting and my support company failed to live up to their name and cause a single casualty. Apart from that it was a great game and although I managed to wipe out a VC squad and their support Mmg I never got close to the village in the timescale.
Following American players managed much better and scored four victories against the VC, in one game the American player only suffered 4 casualties.
Posted by General Buggeration at 12:34