This was the second scenario that I came up with for the NAM weekend with the League of Gentlemen Wargamers.  The basic idea was that all these scenarios were to be very quick lasting no more than an hour to force the attackers to push for victory otherwise the defenders got the victory, there would be no draws except in one scenario where it was possible for both sides to gain their objectives. 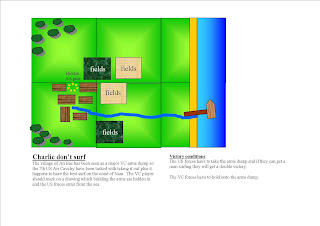 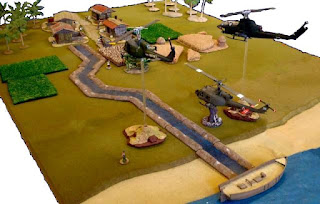 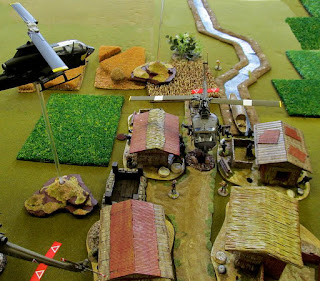 
Like the other scenarios this game changed enormously from the first game where the Americans lost but the VC player learnt lessons and when it was his turn to be American he had an easy victory and this continued for the next four games. It would appear that all the American players moved their choppers into 6" range which under the rules meant that they could spot the enemy, they then pulled back and blasted the enemy, especially the VC Hmg which was the only weapon that could threaten them in the air. If I was going to run this scenario again I wouldn't allow the Americans to spot the enemy unless they opened fire.﻿
Posted by General Buggeration at 00:26