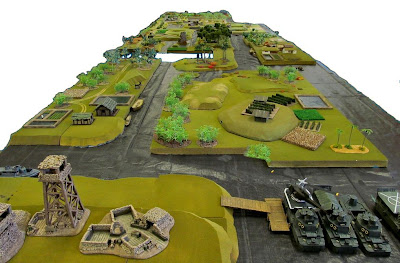 The photo above shows the layout for the large 30'x8' Sunday game devised by Peter Nicolson.
The basic scenario was that the Americans were to demolish the firebase at the base of the photo and set up in a new location which had been started on high ground at the top end of the table.
They also had a military hospital set up in the middle left hand side which they had to defend as well as recover some Special Forces troops that had been captured by the VC and discover and destroy a VC arms dump.  The VC victory conditions were basically to stop the Americans obtaining their objectives and to cause as many casualties as possible.
Needless to say the good guys, VC won the game by stopping the Americans setting up the new firebase plus we captured the old one, held onto four of the six prisoners we had and retained our arms dump which is just as well as we would need resupplied after destroying so many American boats and armour as well as wiping out loads of their troops.
There's no point in me posting any of my pics as Bill Gilchrist and Angus Konstam have already published loads plus reports on their blogs and Bill also has loads of pics on his Flickr account, the link to which can be found on his blog.
http://blenheimtoberlin.blogspot.co.uk/2013/06/vietnam-28mm-bolt-action-big-game.html
http://www.edinburghwargames.com/Journal%2083.htm

Posted by General Buggeration at 18:34