Had a game along at Colin's house this week and went back to WW2 but with a slight difference that this battle was between the Russians and Japanese right at the end of the war. All the figures and terrain is from Colin's vast collection. Following the defeat of Nazi Germany the Russians transferred tens of thousands of men to face the Japanese in Manchuria which the Japanese had taken off the Chinese in the 1930's. This game was a playtest of one of the games Colin is putting on at our next League of Gentlemen Wargamers weekend in November which is based around WW2, I hope to add more as the weeks go by.

The Russians commanded by Colin have launched a lightening strike with tanks supported by armoured infantry and tank riders against what seemed at first a very week Japanese force commanded by me. The scenario is that the Japanese have fallen back to defensive positions over the river and could be set up anywhere over the river except for two sniper teams that could be positioned on the Russian half of the table. 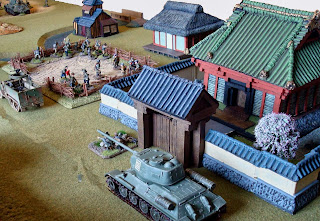 Russian armour trundles through the town 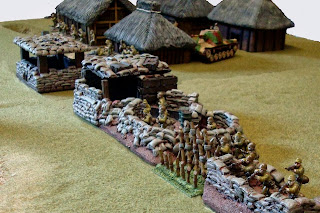 Main Japanese defence line
I placed the majority of my troops and armour in the main defence line and village except for a unit of Manchurian Militia that were left to defend one of the bridges crossing the river line and the 2 sniper teams were placed in the main town on the Russian side of the table. 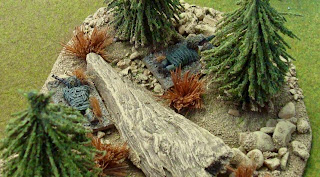 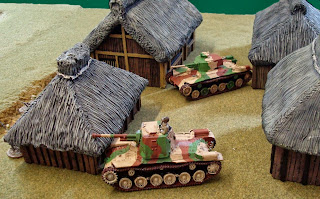 Japanese armour in ambush positions in the village
At first looking at my force which was strong in infantry I thought the game was going to be a walk over for the Russians as the only anti-tank weapons I had were my two tanks, it was only during the fighting that I discovered how effective my 2 sniper teams could be at taking out tank commanders which added with Colin's terrible dice rolling for orders meant that they spent most of the game going backwards and meanwhile my infantry, especially the grenadier company with their 3 light mortars took out all the Russian infantry facing them. They quickly took the first bridge
After an initial successful start when they quickly wiped out my Militia unit guarding the bridge things started to go badly for the Russians and soon all their supporting infantry had been wiped out except for a group that was still on the Russian side of the river at the end of the game. The snipers worked a treat at taking out 2 tank commanders just as Colin decided that tanks without commanders had to pass order tests to act. I'm sure he regretted that as they kept failing. That was the main reason his last lot of infantry were stuck on the far bank as they were trying to take out the snipers and he succeeded in taking out one team but that was his only real success of the game. 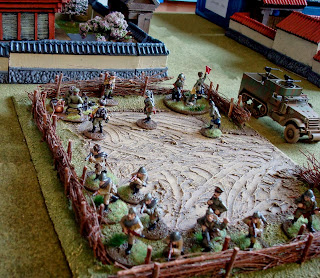 Last Russian infantry sniper hunting
As a playtest the game worked well and the Japanese victory was unexpected so the next time we try it we will add a few more troops and an extra tank for the Russians, especially as they will have a time limit to get their victory.
Posted by General Buggeration at 21:33