I'm just back from one of our great League of Gentlemen Wargamers weekends, this is a group of like minded friends who get together three times a year to fight huge battles or mini-campaigns.
This weekends extravaganza was set in WW2 and involved a series of small one to one scenarios on the Saturday and a mamoth Villers Bocage battle on the Sunday.  There were six tables and scenarios set up and once everyone had a game these were changed each time so we had a total of 24 tables and scenarios to fight over and since there was so much going on I have only managed to take photos of the games I was involved in so appologies to the other guys for not getting shots of their stuff.
We used Disposable Heroes rules for all our games, these are written for much smaller games but we as a group have tested them to destruction in our larger game. 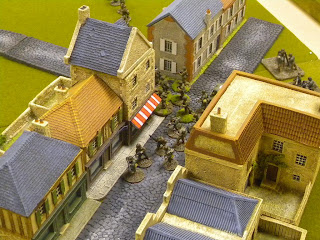 Game 1 involved me trying to find and destroy two German MG nests which were hidden on the table and supported by a couple of rifle squads.  This pic shows my French advancing through a village while mortars are set up in support. 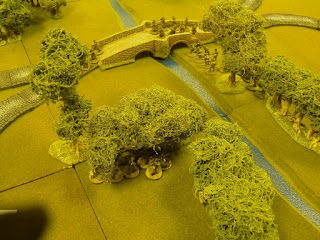 The Germans were set up over an unfordable river and the only way across was over the bridge. 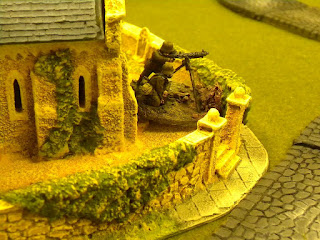 I suffered a number of casualties and failed to destroy the MG's so victory went to Dale Smith.

Game 2 was against Steve Rimmer and the objective for both sides was to take and hold as many buildings as possible.  Each building was given a points token but the amount was unkown until the end of the game. 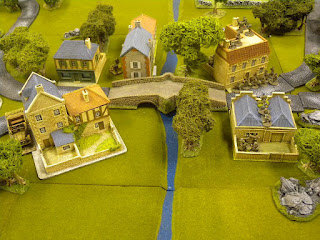 My French advanced from the right and unfortunately there were only two building on my side of the unfordable river and four on Steve's side so he had an advantage from the start which also improved as he played one of Barry's event cards on my half track right from the start which ran over a mine and was disables too far away from the action. 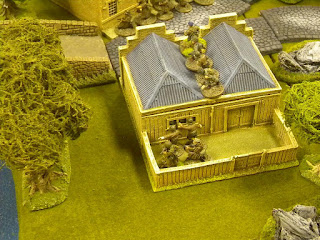 Defending the garage.
Both sides moved into all the buildings and had a fire fight which I think I was starting to get the better off especially with my mortars which suddenly came good having hit nothing in the previous game. The final move saw both sides rushing for the bridge which was also an objective but since it was contested neither of us got the points but Steve still won 250-150 points.

Game 3 was a really unusal game which involved blue on blue action.
The scenario was that troops were retreating and looting as they went and the other side
was made up of Colin Jack's MP's trying to stop the rot and get the soldiers back into action.
As in the previous game buildings or supply dumps were given a points token which the routers
had to loot and get off the table and the MP's tried to get them back and convince the routers
to surrender by negotiation or shooting.
For some reason I forgot to take pics of this game but the highlight for me was a surrounded unit placing a charge in a building which destroyed the building as well as three MP's half tracks and many Red Caps unfortunatley this still didn't give me a victory and all my six units either surrendered or were cut down.  The only unit that had a chance of getting off the table ended up with a token worth zero points. Doh!!!

Game 4 against Barry Hilton was another type of taking and holding buildings to win points.
This time the Germans were actually in the town but not allowed to be in any of the buildings at the start and the other side were given the initiative to start first and this was the first scenario that had armour in it.  My first move was to play an event card which allowed my troops to set up in ambush which allowed them to be close to one of the objectives which they immediately occupied.
Barry replied by launching an assault against the building which ended in disaster for him as his squad was wiped out. 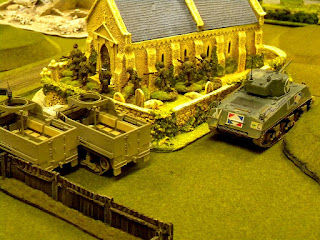 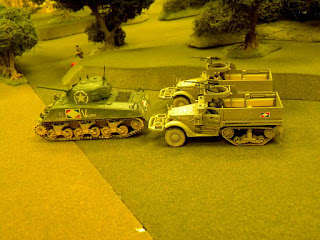 My force consisted of three armoured infantry columns like this. 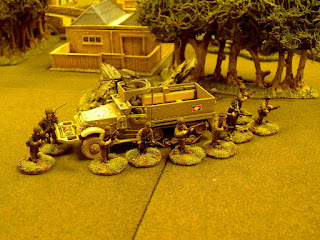 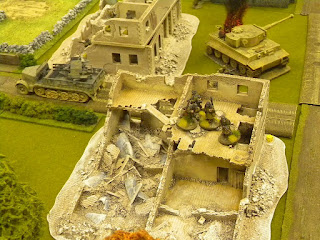 Apart from Panzer Grenadiers Barry's force also had a Tiger and this quad AA gun which proved lethal to my half tracks and infantry. 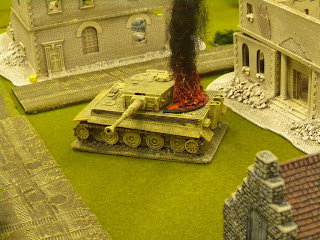 The highlight for me was one of my Shermans knocking out Barry's Tiger
and gave me my first victory.

Posted by General Buggeration at 23:59