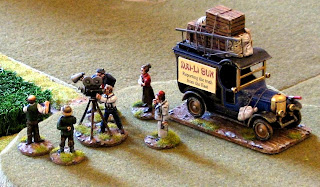 At last the photographs have been doctored, er I mean developed so the Dai-Li Sun can finally produce an honest report telling the truth from the East of what went on at the latest League of Gentlemen Wargamers weekend.
This was a mega Back of Beyond game with 14 players fighting over five 8x6 tables representing the route from Moscow to Vladivostok on the Pacific coast.  Each player commanded a faction which started in their local town except for the Czech Legion which started on their armoured train on the outskirts of Moscow.  Apart from defending their own town all the tables had a number of resource centres such as farms, harbours, oilfields and temples all of which could supply revenue for whoever controlled them.  As if that wasn't enough there were also various monuements dotted about where players could find clues which would help them on quests to find the Tzar, Yetis, Shangri La, a hareem and many others.  There were also special events every move which could give a selection of useful characters which might have special talents or bring bodyguard troops, tanks, armoured cars, boats, planes, a zeppelin or even a flying carpet, so you can see we take this seriously.
The players and their factions were from the Pacific coast
Steve Rimmer - American Interventionist force
Bob Lauder - Red Socialist Force
Bob Talbot - Japanese
Dave O'Brien - Chinese Nationalists
Barry Hilton - Mad Baron (supposed to be a White Russian force but hated everyone)
Peter McCarrol - White Russians
Peter Nicholson - Holywood film crew and bodyguard
Andy Nicholson - White Russians
Colin Jack - Basmachis
Dale Smith - Army of God (Indian Nationalists)
Angus Konstam - Turkish Nationalists
Kevin Calder - Bolsheviks
Adrian Howe - Czech Legion
Charles Grant - British Interventionist Force
Apart from the Czech who had a real train all the other players had a virtual train which allowed them to move from table to table and the three players on the Pacific coast also had a naval boat as well.
The Dai-Li Sun had hoped to make reports from every table but as soon as the Mad Baron turned up the action on the Mongolian table was relentless and the poor peace loving Chinese were fighting for their very existance as apart from the Baron's Madmen he also managed to persuade four other factions to join his crusade for world domination.  What follows is a selection of photos with captions to show the mayhem, double dealing and back stabbing that went on all weekend and what great fun we had. 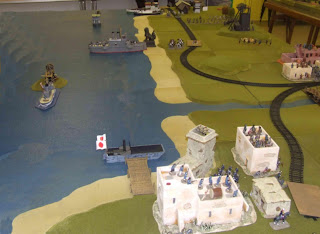 The Pacific coast with naval forces deployed and Vladivostok in the distance. 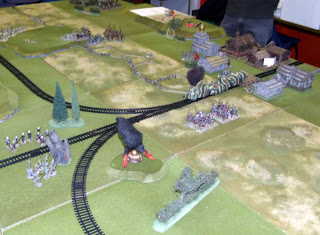 Moscow outskirts with Bolshy defenders and the Czech Legion about to start on their journey. 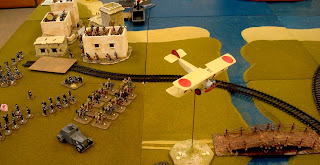 Japanese forces about to start their double cross. 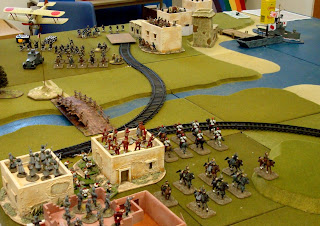 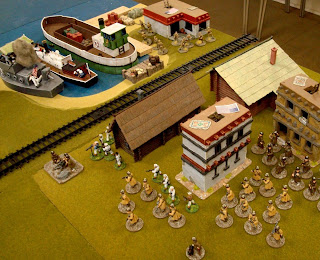 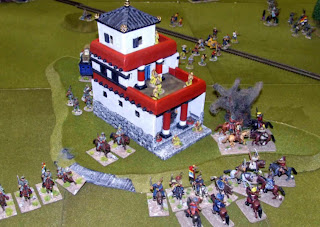 Innocent Buddhist temple being attacked by Mad Baron forces and heroic Chinese defenders protecting the unarmed monks who were brutally murdered later in the weekend. 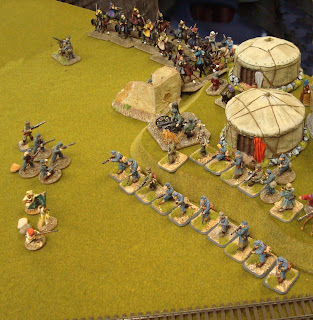 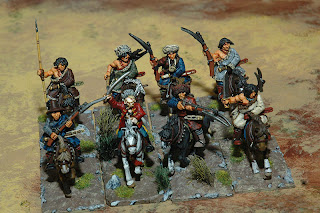 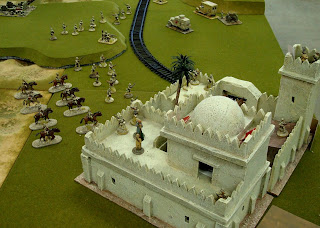 Turkish fort and centre of deployment. 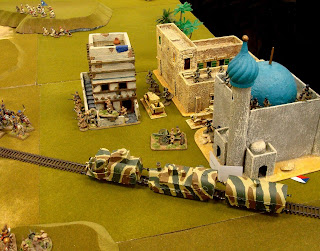 Samarkand the stronghold of the Army of God having the dubious pleasure of a visit
by the Czech Legion aboard their armoured train. 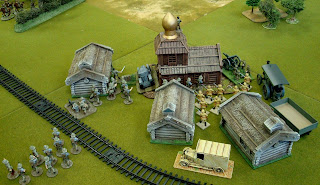 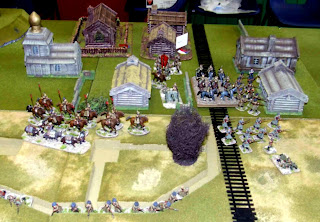 Bolshevik defenders on the outskirts of Moscow.
These were the starting positions of some of the factions and I'll add some combat photos in another post.  Most of the forces were supplied by Colin Jack, the Chinese by myself, Turks and Basmachis by Angus and Bolsheviks by Kevin plus the four of us supplied a number of figures to the other factions.

Posted by General Buggeration at 11:35