Here are some more action shots of the mega Back of Beyond game we had at the weekend which also shows some of the special events and characters that appeared over the weekend.

This was the Czech Legions armoured train commanded by Adrian Howe.
His force was the only one that actually had an objective which was to make their way from Moscow to Vladivostok with the Tzars gold reserve and make their way home to the newly formed Czechislovakia aboard ships supposedely supplied by the Anglo-American Interventionist forces.
The main trouble Adrian had was he couldn't help his baser instinct to double cross every force in all the areas he travelled through but this came back to haunt him at the end. 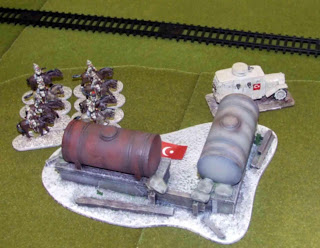 This was the Baku oilfield which was one of the resource centres and remained in Turkish hands over the whole weekend although I understand that the Army of God and Bolsheviks tried to 'visit' on a few times. 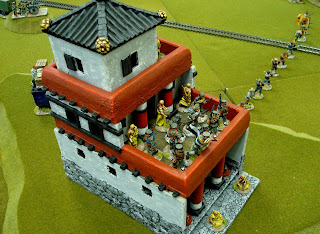 This Buddhist temple was one of the resouce centres on the Mongolian table and this was it in more peaceful times before it was treacherously attacked by the Army of God and the Mad Baron. 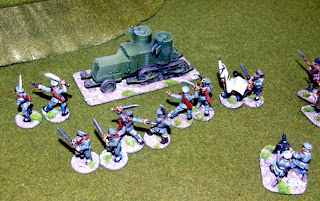 Some of the heroic Chinese defenders who didn't know which way to turn as they ended up with enemies all round them but eventually beat off every attack and even shot down two enemy planes. 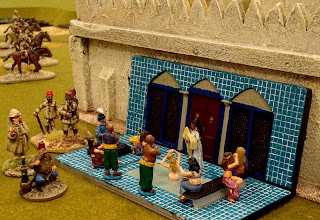 Enver Pasha, that's him in the pith helmet managed to find the Sultan's hareem where he entertained himself for the rest of the weekend. 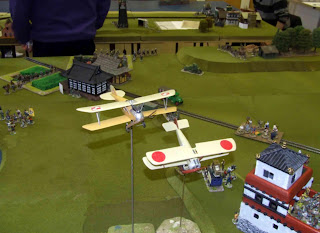 Japanese aircraft flying over the Chinese town of Harbin and terrorising the monks in their temple. 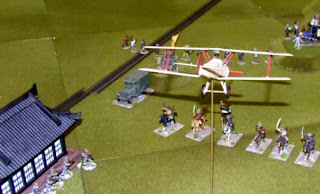 Machine gunning Mongol cavalry.
My Chinese forces suffered attacks from four aircraft all weekend and the my cavalry suffered severely being unable to reply whereas at least the infantry managed to shoot down two of the evil machines. 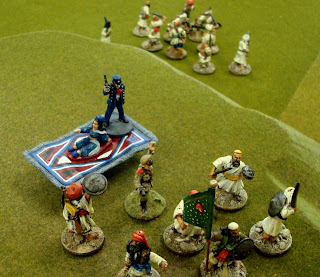 Molto Cortese on the flying carpet was one of the characters who made an appearance over the weekend as was the flying carpet which ended up being traded with the Japanese who had an assasin who hired themselves out to anyone to knock off their opposing leaders.
Cortese came supplied with a ship which was used in a double cross of Adrian the arch double crosser. Angus who had Molto and his ship sold the ship to Adrian so that he could get his troops and gold reserves back to their homeland, the only downside was that Angus had actually sold the ship earlier to another faction and when he eventually found out the double cross the look on Adrians face was hilarious. 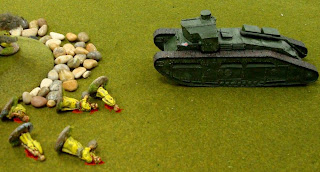 The worst attrocity all weekend has to be the gunning down of innocent unarmed Buddhist monks by the forces of the Mad Baron who tried to deny the event but this photo clearly shows his armour shooting down the monks who are clearly unarmed.  The Barons only defence was that he had changed his religion from Buddhism but this is no excuse for such a shocking massacre. 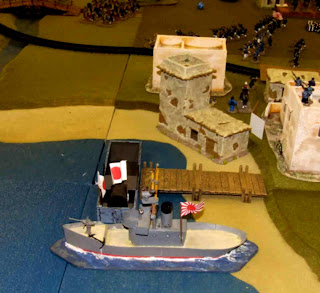 Naval force of the nasty Nips. 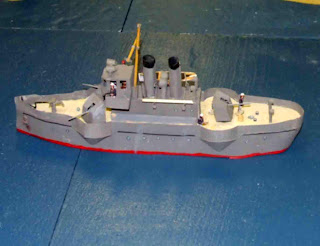 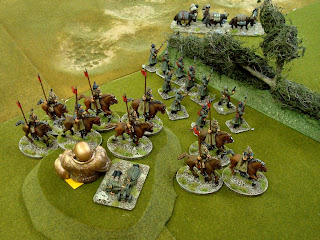 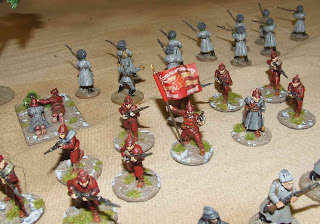 Treacherous Socialist troops that broke their peace treaty with the Chinese and attack Harbin but were eventually destroyed for their trouble. 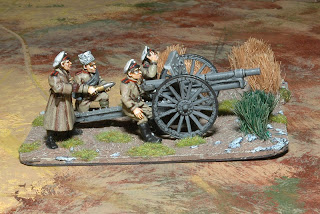 Russian artillery painted by me which was part of the forces of the Army of God. 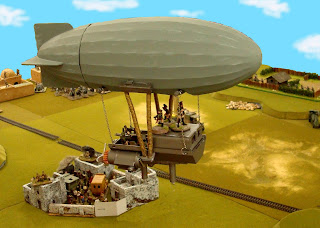 This zeppelin and its female crew had to be one of the most spectactular characters to appear.
Zeppelin from Colin, crew painted by me and fighting platform scratch built by Hugh Wilson. 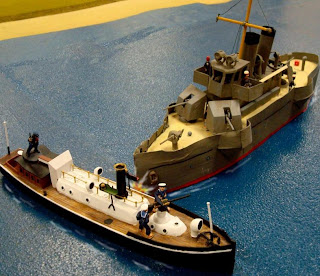 This was the final outcome of the Czech Legion boat double sold by Angus being rammed and sunk by the Socialist gunboat of Pinky Bob.
Another event which we unfortunately have no photographic evidence of was that the White Russians who were trying to rescue the Tzar accidentaly killed him during a fire fight when attempting to get him back from Peter's film crew. At least that's the story that Peter was putting about and says he has photographic evidence that the Whites did it but they deny the allogations and say the whole incident was staged by the film crew because the Whites refused to pay a ransom.
These are only part of the stories that took place all weekend where everyone had fantastic fun and I'm sure the chaos will continue in our next big Vietnam game in June.
﻿
Posted by General Buggeration at 12:45